July 22, 2019          594 views
Thien Duong (Paradise) Cave in the Phong Nha – Ke Bang National Park, the central province of Quang Binh, has been recognised as the one with the most unique and magnificent system of stalactites and stalagmites in Asia. The Asia Book of Records’ certificate was presented at the opening ceremony of the fourth Quang Binh Cave Festival in Dong Hoi city on July 20. 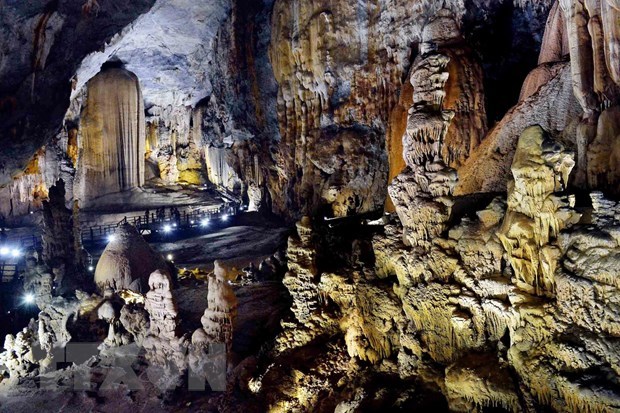 Thien Duong (Paradise) Cave has the most unique and magnificent system of stalactites and stalagmites in Asia (Photo: VNA)
As a famous cave in the world, Thien Duong is located 60km northwest of Dong Hoi city, in a primeval forest at an elevation of 360m above the sea level. The cave is 31.4km long and was first discovered by the British Caving Association in 2005. Addressing the event, Chairman of the Quang Binh People’s Committee Tran Cong Thuat said when talking about his province, people now remember it as a “kingdom” as beautiful as in fairy tales with gigantic, mysterious and endless caves on Truong Son Mountain Range. More than 400 caves of all sizes have been found in Quang Binh so far, and counting. Particularly, the discovery of Son Doong Cave – the world’s biggest cave – was announced in 2009. Explorers recently found an underground river system inside this cave, he noted, adding that the Phong Nha – Ke Bang National Park, a world natural heritage site full of interesting surprises, are awaiting visitors. During the month-long Quang Binh Cave Festival, tourists can engage in a variety of activities, including helicopter tours, music shows and street carnivals.